What better to read and learn about during summer than Florida’s Oceans! 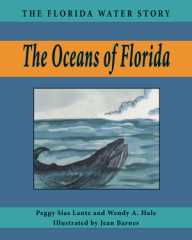 This young adult book features the astonishing abundance of marine life found in Florida’s offshore waters. More than 1,000 species of saltwater fish have been identified. Add to that number the invertebrates, algae, grasses, seaweeds, plankton, and all of the other creatures that call the ocean home, and you’ll discover an amazing world of life surrounding you in Florida’s oceans.
Get it now at Amazon!

A native Floridian, Peggy Lantz is former editor of the Florida Native Plant Society’s magazine, The Palmetto, and the Florida Audubon Society’s magazine, The Florida Naturalist. She co-authored The Young Naturalist’s Guide to Florida with Wendy Hale. Ms. Lantz lives in Woodsmere in west Orange County, Florida, the community settled by her grandfather in 1914. Wendy Hale worked as a park ranger for Canaveral National Seashore before joining the Florida Audubon Society as an environmental educator. She moved from Florida to Wales several years ago.

Olivia Brophie and the Pearl of Tagelus by Christopher Tozier

Worlds Around Us is an 80-page curriculum built specifically to teach Olivia Brophie and the Pearl of Tagelus as well as related science activities and lessons. It is appropriate for grades 3-6. Most of the content has been created by other teachers who have successfully used it with their students.

Click here to learn more on the website for Olivia Brophie and the Pearl of Tagelus. Lots of FREE downloads!

Author Robert N. Macomber, author of the Honor series, will be appearing  at Bookstore1 Sarasota on May 23rd at 6pm. He will be discussing “Freemasons and their 30-year struggle to gain Cuban independence in 1898, and the author’s experiences with their fraternity inside modern Cuba today.”

Our new catalog, featuring all of our titles, is now available.

View this document on Scribd

The blogosphere and reader tweeps everywhere are buzzing with the news that Kobo and the American Booksellers Association are joining forces. Their mission: to bring Kobo e-books and independent bookstores together. Of noted interest is training and in-store merchandising availability. For more information, check out the ABA’s press release.

Like a lot of modern moms, I began reading to Son No. 1 in utero. I wanted to give him every possible advantage on his life’s journey—a head start of sorts—so I read little board books aloud to him as he floated in his temporary home of embryonic goo and poked his elbows into my ribs. I imagined his brain absorbing those words and ideas, his heart calmed by the steady measure of my voice.

When Son No. 1 was eighteen months old, he would refuse to lie down for a nap until I’d read one of his little books. By that time, I was awaiting the arrival of Son No. 2 and was absolutely exhausted more often than not. Sometimes I’d turn two pages instead of one or pretend the story was finished when it wasn’t, and he’d usually catch me and complain vociferously. All that mattered was the book.

While his second-place status meant he rarely had my full attention, Son No. 2 did get to hear me read to Son No. 1 every single day from his crib or from his bouncy seat perched on the kitchen table or from his blanket on the living room floor next to the dog. And he tagged along on wobbly legs as we visited the library week after week, listening to stories read aloud by the librarians and then picking out our own jewels to take home.

Does having that all-important head start make kids joyful, enthusiastic readers, lovers of books great and small? You bet it does, as least in our case! Son No. 1 still loves to read. He loves to read so much, in fact, that he’ll continue to read when he should be getting ready for school or making his way to the dinner table or going to bed. I sometimes have to surreptitiously insert a bookmark and close a book with his nose still in it to make him stop reading.

I’m at home wherever there are books, and I’m the type of mom who thinks hanging out at the library on a Saturday afternoon is fun. And while my boys may hem and haw at the idea of having to set foot inside an actual library during summer vacation, they immediately zoom off in different directions as soon as the door opens before them, Son No. 1 to find the latest Percy Jackson or Heroes of Olympus installment, Son No. 2 to the comics section, searching in vain for a Calvin and Hobbes collection he hasn’t yet devoured.

So what do you do if your son or daughter isn’t a born reader? Every kid has an interest, and every interest, no matter how obscure, has had a book or magazine devoted to it. Is your son begging for a hermit crab, guinea pig, or gerbil? Say OK but only if he first reads up on how to care for said pet. Does your daughter want to learn to water-ski in Sarasota Bay? There’s a magazine for that called—you guessed it—Water Ski.

And—oh, yeah—read with and to your kids, no matter how old they are. Last year, Son No. 2’s teacher read the student version of Patrick Smith’s A Land Remembered aloud to the class. Every student loved it. Even those kids who weren’t avid readers enjoyed listening to a simply worded, action-packed historical novel read slowly and purposefully by a teacher who understood the power of a well-placed pause. They could identify with Zech MacIvey, a boy their own age, even though Zech’s story takes place 150-plus years before their own. And they could identify with their patient teacher, who obviously loved the book as much as they did.

Kris Rowland is a freelance writer, editor, and proofreader whose clients include Pineapple Press.

Larry Perez, author of Snake in the Grass: An Everglades Invasion, was on TV recently talking about pythons in the Everglades. Here’s a pic from his appearance:

Larry Perez, author of Snake in the Grass: An Everglades Invasion

Did you love reading A Land Remembered by Patrick D. Smith?

We also offer a DVD for sale that talks about Patrick Smith’s books and writing. It features interviews with Mr. Smith. For a sneak peek, check out this YouTube video:

Look no further! We sell a ton of regional ghost books that are sure to scare you.
Check out this link to learn more.

One Hatchling at a Time

Sea turtle nesting season is winding down. It begins in early May and goes strong until the end of June or early July. Some turtles continue to lay eggs in August, occasionally September; the season varies slightly by species. Eggs incubate for 50-55 days so hatching begins in earnest mid-July. Turtles lay about 100 golf ball—size eggs in each nest. The same turtle can nest several times each year, the most recorded being eight. That’s a lot of eggs. Scientists estimate 1 in 1000 hatchlings survive to adulthood. And since not all eggs result in hatchlings, mama turtle is trying to increase her odds of success.

All sea turtle species are either threatened or endangered. (Read about a recent decision on the status of the loggerhead here.) Because human activity is the major cause of their decline, we are obligated to help increase their survival odds. This explains why hundreds of volunteers in Florida (and beyond) are on the beaches at dawn looking for telltale turtle signs.

Early in the season we look for adult tracks and nesting activity. Nests are located, marked, and where necessary, protected by cages or other devices to hinder coyotes, raccoons, and other animals that would love to make a tasty (and messy) meal out of the newly laid eggs. (You can learn how to identify the tracks yourself with this video from the Florida Fish and Wildlife Conservation Commission (FWC). Bonus: the narrator is Pineapple author Blair Witherington!)

Detailed nesting records are maintained for two conservation programs run by FWC. Throughout the incubation period records are kept of predator activity, beach erosion, and nest flooding during storms or unusually high tides. After 50 days volunteers keep a keen eye out for hatchling tracks. Three days after a hatch, when presumably all able hatchlings have departed the nest, each nest is excavated. Once again, records are kept—of hatched and unhatched eggs, live hatchlings still in the nest, or sadly, some that didn’t make it out.

Any volunteer will tell you there’s nothing quite like rescuing a live hatchling that couldn’t make it out of the nest. You release it with the hope that it will be the one in a thousand that makes it to adulthood!

You can check out the Sea Turtle Conservancy website to learn more about what volunteers are doing. You can even become a sea turtle fan on Facebook! The Amelia Island Sea Turtle Watch site is also worth a visit for some awesome photos.

As I mentioned in my last post, nesting numbers are up this year—at least on our small part of the beach. We won’t know if that can be said for the entire state until FWC has collated the data. I did read that numbers seemed to be up in Georgia this year as well (see the second story in the hurricane link below for details). Time will tell if the tide is turning for these lovely creatures or if this is a blip on the radar. But for now, we’ll take it as good news.

Turtles of a different kind are getting help in our more northern climes. Check out folks helping out the diamondback terrapins (among others) in Massachusetts. The August 2010 archive has a great story on a rescued Kemp’s ridley. For all things turtle (and beyond!) this is a great website.

Here’s a quick synopsis of other news on the animal conservation front this month starting with the good news that birds can navigate through hurricanes.

Hope you have some good news to share from your area!

Bonnie is the author of Those Mischievous Monkeys (coming January 2011). She teaches people about conservation and sustainability—how to use less water, electricity, fuel, and other stuff—so that humans, animals (including monkeys!), trees, and plants can all share the planet and pass it along to the next generation. Originally from Canada, Bonnie now lives in Florida with her husband Jim and their two mischievous dogs, Cooper and Joie.